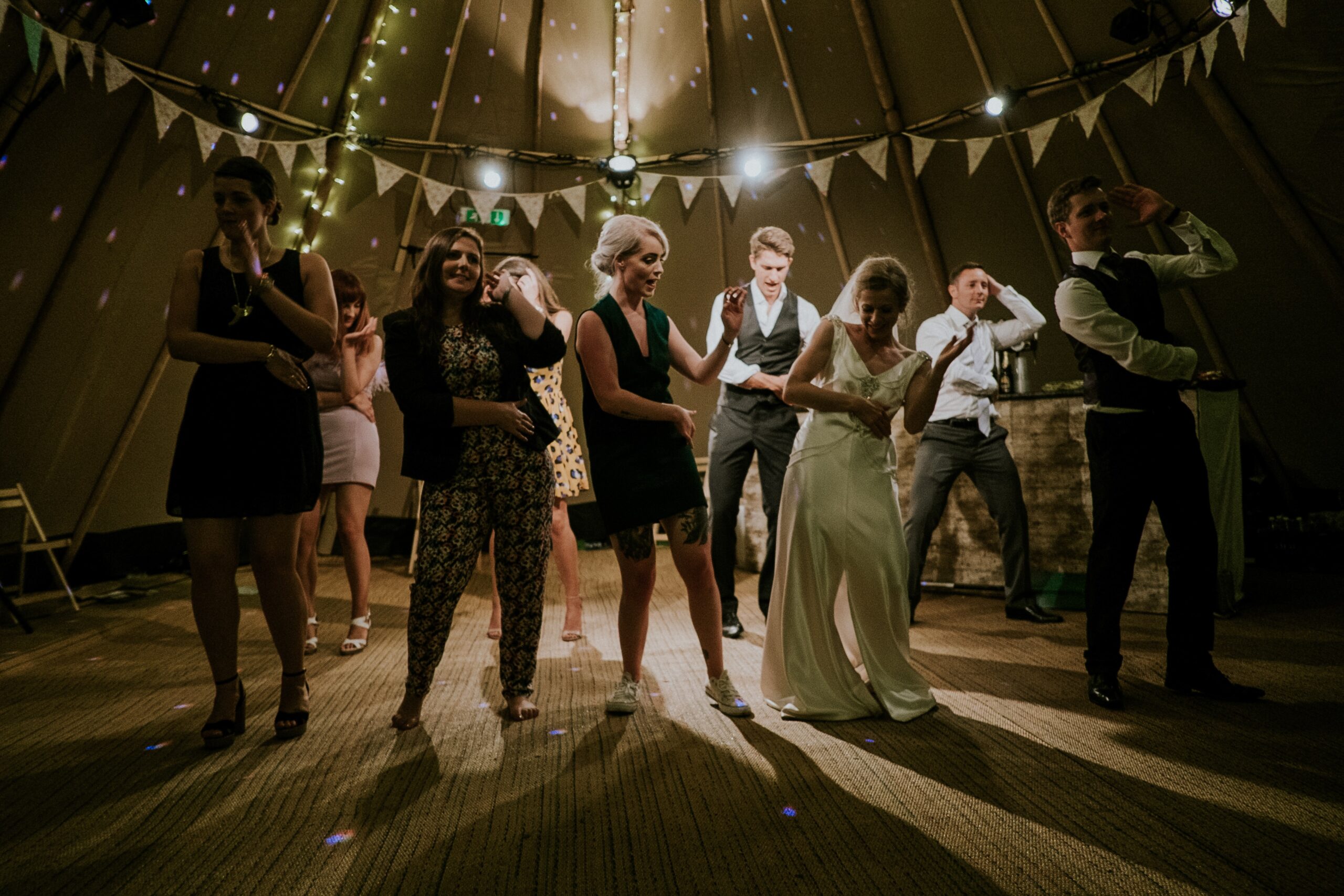 Okay so maybe that’s a slight exaggeration. However, there are quite a few songs that have overstayed their welcome on wedding reception playlists. When creating a playlist for your wedding reception, you definitely want to choose songs that are recognizable but avoid going too crazy with the campy line dance hits. While you most definitely can incorporate songs from this list, we urge you to use these songs sparingly and thoughtfully. The goal is to create a playlist that has some popular hits but is also unique and true to your own music tastes.

That being said, here is our list of songs we think are overplayed at wedding receptions.

Okay, now we feel bad about this one. After all, the message of the song is one of pure elation and positivity. Pharrell was truly feelin’ himself when he wrote this song, that much is clear. But the general public has had this song forced down their throats at every turn since the second it came out, so maybe leave it out of the wedding reception playlist.

On one hand, classic line dance songs are a necessity. They motivate people who wouldn’t otherwise dance to get up out of their seats and boogie with those that possess a bit more self-confidence. However, there is a line that must be drawn (ha-ha, get it?). If you’re blasting back-to-back-to-back line dance hits, people will slowly start vacating the dance floor out of boredom.

No, believe it or not, the YMCA did not pay The Village People to write up a catchy jingle for their worldwide youth organization. In fact, they actually threatened to sue the band over trademark infringement, though later settled out of court. We’ll admit, it’s a fun song and it does get people dancing (or at least lazily moving their arms), but that doesn’t negate the fact that it is overplayed to the max.

#4: “I Gotta Feeling” by The Black Eyed Peas

AKA the junior high dance anthem.

One of the newer jams to grace the list, the “Despacito” remix with Justin Bieber hit the charts in 2019, but that hasn’t stopped it from quickly skyrocketing into overplayed-dom. Which is funny because, well, most English-speakers can’t even sing along since the majority of the song is in Spanish.

#6: “Celebration” by Kool and the Gang

If you really ponder the lyrics of this song, you’ll realize: hey, wait a minute! This guy is trying to force me into a celebration! I mean … “We’re gonna have a good time tonight”?

“Let’s celebrate, it’s all right”? I imagine this is what a particularly jubilant kidnapper would sing to their victim in attempts to placate them.

This song is certifiably creepy. Thicke literally chants “I know you want it” over and over throughout the song, how are people okay with getting down to this?!

This is a perfect example of a great song that just got absolutely obliterated due to chronic overplaying. Fortunately, people still seem to get on board with belting it at the top of their lungs when it comes on in the club, so it’s not a huge faux pas to play it at your wedding. However, expect some groans and eye rolls (but it’s okay, even the naysayers will eventually be singing along too, it’s inevitable).

Just one question: Why?

It would only be fitting to wrap up this list with a last dance/closing song. This is a good song, I think we can admit that much. However, playing “Closing Time” at the end of the night is cliché and quite frankly, kinda awkward.

Alright, we’ve had our fun roasting these songs. But truly, if you want to play every single song on this list and more, do it! Remember that it is YOUR wedding, and you should most definitely do whatever makes you happy. If you want to keep “Cha Cha Slide” on repeat or blast the Tom Jones classic “What’s New Pussycat?” 21 times in a row (with one appearance of “It’s Not Unusual” sandwiched between, of course), then by all means go for it. Creating a playlist should be an enjoyable activity, so don’t stress too much over it. Include songs that you and your betrothed enjoy, and have fun with the process!