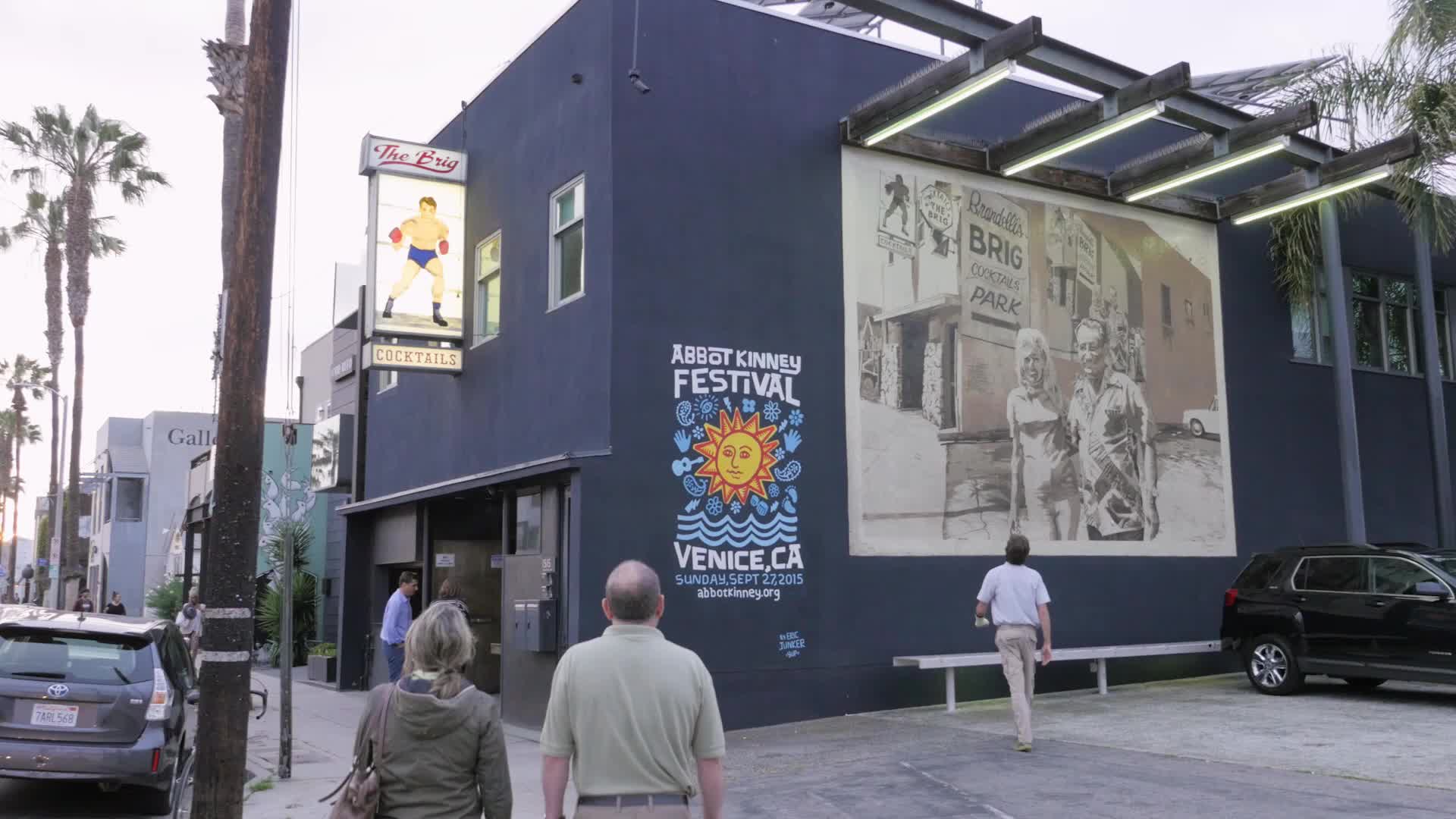 The shining star of The Brig Parking Lot is, well, The Brig itself! (Duh!) This quaint, no-frills Venice bar is the cornerstone of Abbot Kinney Boulevard. The establishment has been serving up the finest adult beverages for 60+ years and has made a name for itself. It has become one of Venice’s quintessential stops to round out your night. Though it’s been classified as a “dive bar”, no need to worry because it’s recently undergone a massive facelift. But hey, there’s nothin’ wrong with a dive bar in our eyes! While it’s still the same good ol’ Brig as we remember it, they’ve certainly elevated things to the next level. Ever since the early days of this bar, it has been transformed! From the Mid-Century Modern mediocrity to sleek, industrial design.

What’s The Brig all about?

The classic bar was named after one of two things: a two-masted, square-rigged ship with an additional gaff sail on the mainmast, or a warship prison. If it’s the first one, well, that’s cool. If it’s the second one? Still cool! Honestly, if warship prisons are serving up craft beers, mouthwatering bar food, and great company, then arrest us now!

The Brig hosts nightly entertainment, with numerous sports games playing on every screen. You can even expect DJs/bands present most evenings playing great tracks, and food trucks parked outside! The Brig is also well-known for its billiards tables if that’s your thing. They even host pool tournaments every Wednesday night. That’s perfect for those of you who have a competitive itch and want to show off your skills! They also serve as the ‘unofficial HQ’ of a little shindig called “First Fridays”, according to their website.

Oh yeah, you can also expect to find these when you walk through the door. Some of our favorite features that give The Brig its famous personality and charm:

History of The Brig

The Brig is owned by the Reiss company, operated by Dave and Patti Reiss. According to the Reiss Company website, through the friendships and insights he gained as a DJ, “[Dave] went from opening Swingers on Beverly to Red, Sugar, The Brig and half a dozen other properties — which isn’t too bad for a kid who got his start churning ice cream at Swenson’s in Westlake.” Dave and Patti met while working at New Line Cinema in their marketing department. They both had extensive experience in the entertainment industry from Warner Music Group, to Warner Home Video. They say, “Patti was no stranger to the food world, having founded a family baking company that sold to hotels and gourmet food shops, and catered events large and small in the Twin Cities.” Since their fated first meeting, the two joined forces to revamp The Brig, and a handful of other businesses too.

The architectural/design goal for The Brig was to create a gateway into Venice while maintaining the integrity and charm of the bar’s interior. This way, they could create a public space that reflected the diverse, eclectic spirit of Venice. The designers took inspiration from Italian piazzas and redesigned the parking lot with various textures and colors of concrete, and added a bench below the famous mural. “This project is a combination of the raw and refined, the old and new, the highly deliberate and ad-hoc,” they say. “It maintains the edginess of the original bar while adding a new sensuality and fluidity that makes it a highly complex and sophisticated environment.”

Speaking of the mural, how could we forget The Brig’s most treasured piece of history?! The Brig’s famous mural, painted on the side of the bar, was painted in 1973 by California muralist, Art Mortimer. The two people featured in the painting are Babe and Betty Brandelli, the original owners of The Brig. Babe Brandelli was a former Golden Gloves boxer, so naturally, the bar had been decorated with boxing memorabilia. We think that’s pretty cool!

We hope you’ll stop in for a drink sometime and check out a piece of Venice history! Check out the food trucks, play a game of pool, or sit back and enjoy the atmosphere of The Brig. We’ll be waiting!