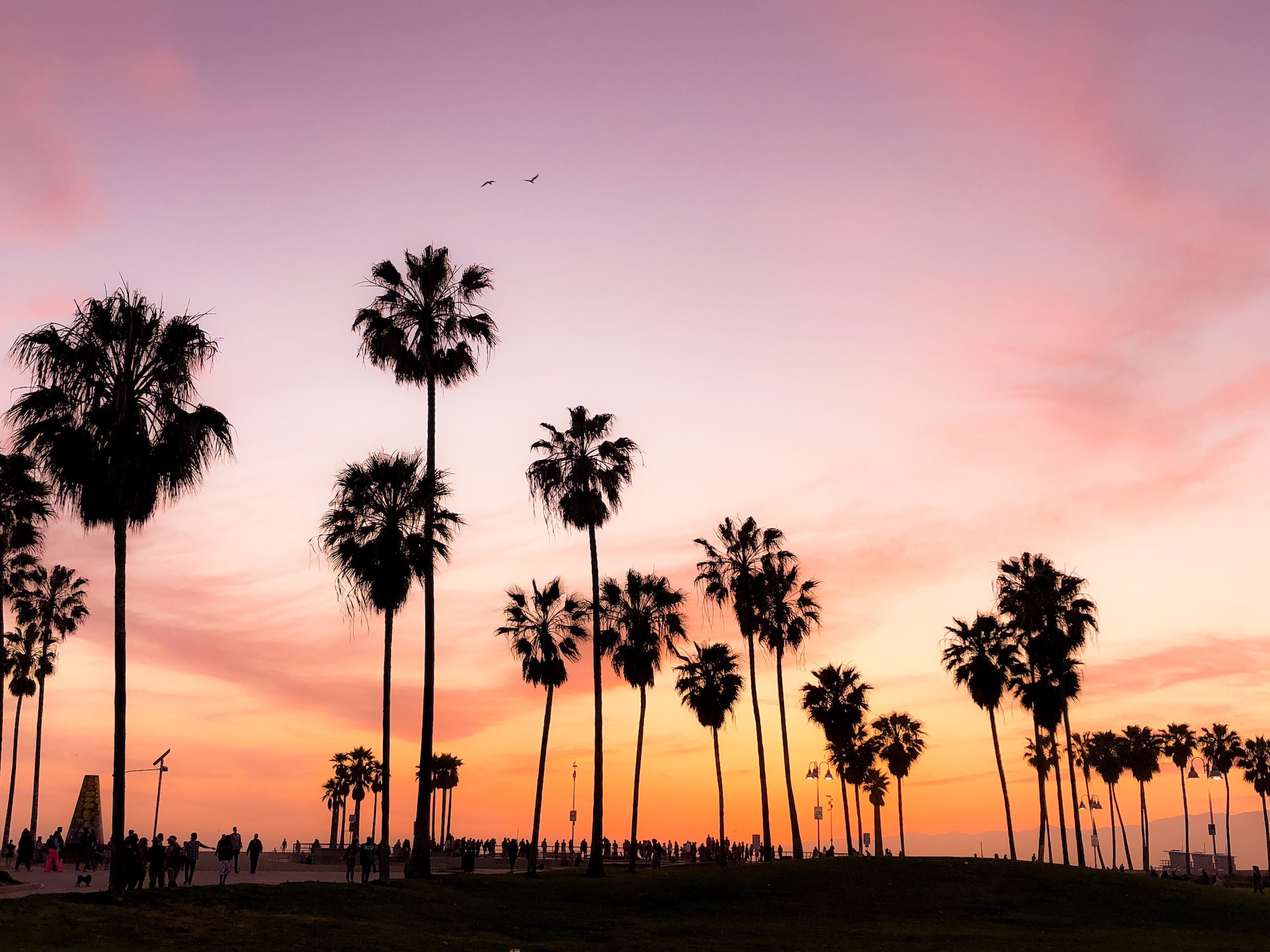 Street art is a staple of Venice Beach. You’d be hard-pressed to walk more than a couple of streets down without encountering one of the city’s stunning, vibrant murals. And, most of Venice Beach’s most famous murals are actually located right here on Abbot Kinney Boulevard! Each mural has a story and history attached, and you can make a whole day out of walking around town, scoping out all of the gorgeous artwork. The images and styles are diverse, just like the artists who created them. Los Angeles and Venice Beach attract artists from all over the world to come and paint these gigantic masterpieces on once-empty walls across the city. In fact, L.A. has been considered the “Mural Capital of the World” since 1976! As you can probably guess, this list was pretty difficult to make. With so many beautiful works of street art, narrowing it down to just eight was nearly impossible. But here are some of the ones that really caught our eye!

1. “Touch of Venice” by Jonas Never

The name of the wall, “Touch of Venice”, is a playoff of the 1958 Orson Welles film “Touch of Evil”. The black and white colors reflect the film’s noir style and capture the classic charm of Venice Beach.

“It’s in that part of Venice Beach where you get a cross-section of America,” Jonas Never (the artist) said. “Locals, tourists, homeless and artists come through here and all of them had different takes on the mural and what should be there.”

Jonas Never watched the film three times to pick the perfect quote to include in the mural, with the goal of making it look like the opening scene of a movie. He settled on “Like a dream that I remember from an easier time.”

“I wanted to capture what Venice was, what it could be and what it is today,” Jonas Never said.

This mural can be found on the side of the Rag & Bone store on 1121 Abbot Kinney Boulevard and has skyrocketed in popularity for its unique style and medium. Crafted out of weather-proof, die-cut, hand-painted wood panels mounted onto the brick wall, this work of art embodies the color and fun of the technicolor style.

This is a mural from the creative mind of Jonas Never — this time in collaboration with fellow artist, Jaber The Graffiti Ninja. This mural pays homage to the legendary Zephyr skateboard team that rose to fame in the 1970s for their popularization of skateboarding. These skaters were inspired by the flow and grace of surfing, which they took to the streets and pools of Venice. Pictured is Jay Adams, a fearless, innovative skateboarding legend and the youngest member of the Zephyr skateboard team. Check out this mural in person at Aragon Court.

Another Abbot Kenney masterpiece, “Bear Witness” pops out at you from the street with its lifelike, realistic portrait of a roaring bear contrasted against the vibrant, poppy colors in the background.

The #SaveLACougars mural can be found on Milwood Avenue and Abbot Kinney Boulevard. This mural is a wonderful work of art with an even better message. Wild cougars in L.A. have been turning up dead because their habitats have been destroyed by construction in the L.A. area, forcing them onto the streets and into harm’s way. The #SaveLACougars movement is an effort to preserve/create safe ways for wildlife to travel between their natural habitats. Louis Masai created this mural to draw attention to the campaign with an almost quilt-like style and a mix of grays and bright colors.

Named after the popular gay bar it decorates, “Roosterfish” is a sight to behold. Wrapping around the corner of the blue building, this surrealist mural reflects the classy yet eclectic vibe of the bar.

7. “Resurrection of Angels, Part I” by Fin DAC

This is part one of a multiple-part series of murals by Irish artist Fin DAC. The name reflects the city in which it’s located, Los Angeles. The work incorporated real gold leaf, which adds for a gorgeous pop of metallic sheen that really makes this masterpiece stand out against the black wall behind it. This mural can be spotted on the side of Love Shack at 2121 Lincoln Boulevard.

8. The Brig Mural by Art Mortimer

And of course, we saved the best for last (and no, we’re not biased at all… 😉 This is our pride and joy, The Brig mural, located on the side of The Brig restaurant and bar. This sepia-toned work of art overlooks The Brig parking lot and features the original owners of The Brig, Babe and Betty Brandelli. The mural was painted by Art Mortimer in 1973, back when The Brig was called “Brandelli’s Brig.” Babe was a former Golden Gloves Boxer, so the bar was filled to the brim with cool boxing memorabilia! If you look close, you can even spot Mortimer himself in the background, painting the mural behind the Brandellis. Come check it out for yourself, maybe stop in for a drink or two while you’re at it!